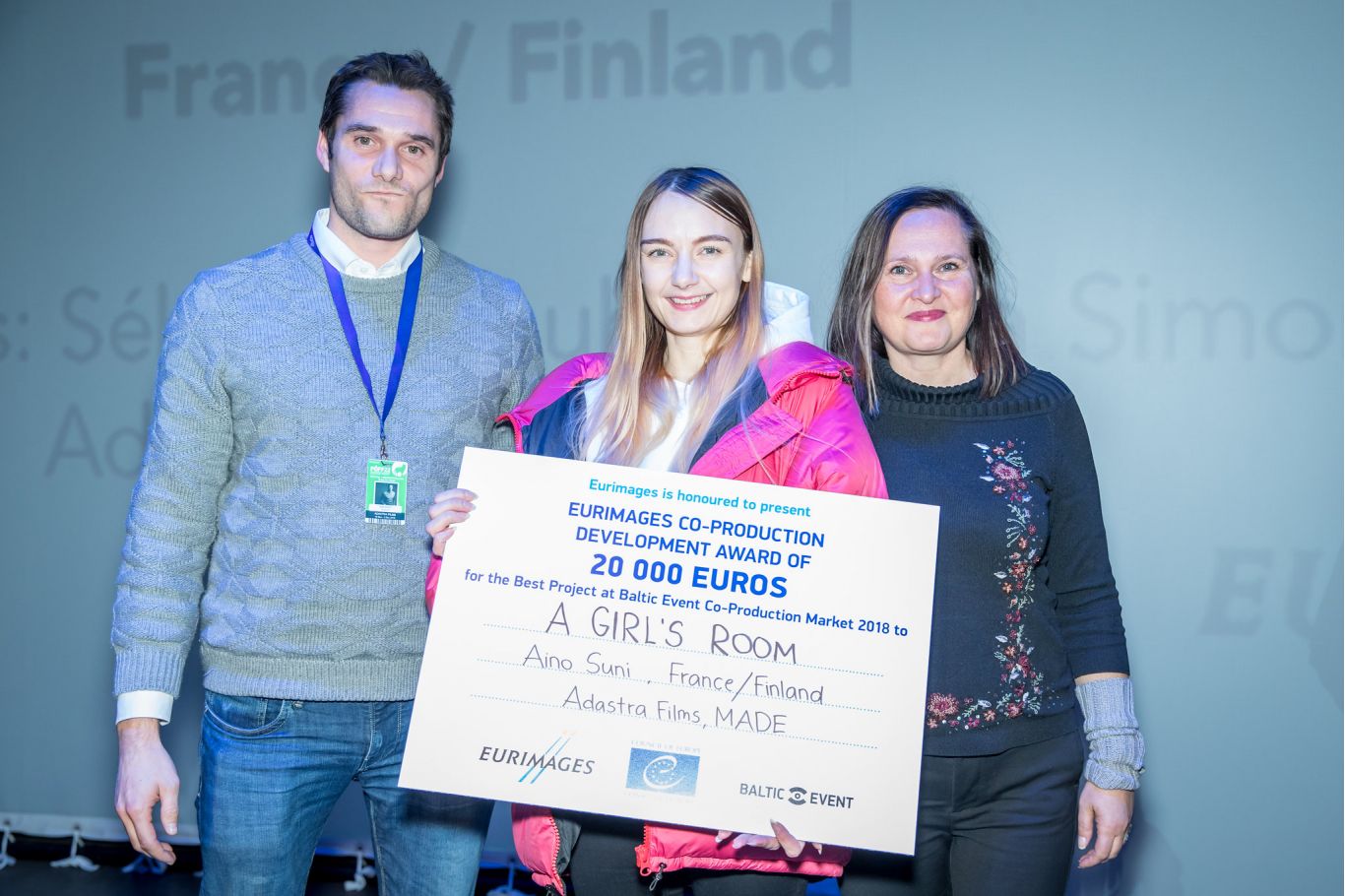 18 projects will be presented at the Co-Production Market 2019 taking place between November 26-29 during the Industry@Tallinn & Baltic Event. The market’s 18th edition welcomes both promising debutants as well as industry heavyweights, with stories ranging from raw personal traumas to mind-bending thrillers.

“After opening our market to filmmakers from across the globe looking for a window to our region a few years ago, we are excited to admit that filmmakers from outside our traditional scope have finally found us,” Leana Jalukse, Co-Production Market Manager comments. “Our Focus Countries Ireland and Argentina are also bringing some winds of change, but, first and foremost, we’re proud to be showcasing some of the greatest talent from right next door – Central and Eastern Europe, and Scandinavia,” she adds.

Baltic Event title countries, the Baltics, bring three debuts to the slate, each of which is following an award-winning short film of the director and is backed by an established production company – children’s film A Butterfly’s Heart by Inesa Kurklietyte, produced by Zivile Gallego of Fralita Films from Lithuania; Reconstruction by Evar Anvelt, with Laura Raud’s screenplay based on the novel by her father Rein Raud produced by Andreas Kask of Nafta Films, Estonia; and loosely autobiographical The Golden Spot by Liene Linde, produced by Guntis Trekteris of Ego Media, Latvia.

Continuing on an autobiographical note, Polish coming-of-age story The Great Match by Filip Syczynski, backed by renowned producer Anna Rozalska of Match & Spark. Poland is also represented by a tough journey towards motherhood, The Seal Mother, the second feature by Agnieszka Trzos, produced by award-winning Roman Jarosz of Holly Pictures.

Moving on to Finland, Kaarle Aho (Black Ice, The Fencer) of Making Movies, whose numerous successful films have started out at Baltic Event over the years, brings to us The Good Driver, the feature debut by award-winning documentary filmmaker Tonislav Hristov – the film will be a co-production with Bulgaria. Another co-production including Finland is Aria, an intense love story by award-winning director Noud Heerkens, produced by Joram Willink of Bind, the Netherlands – with the third co-production party Belgium represented by the project’s screenwriter and DOP. Finland is also represented by the second feature by Miika Soini (Thomas), Never Enough White Roses, a lyrical story dealing with the past, produced by Tiina Butter of Butterworks.

Two projects have been selected from Russia. Babydoll is the feature debut by award-winning short film director and actor Elena Lanskih, backed by the experienced Natalia Drozd of CTB Film Company. The second Russian entry, The Conference, by award-winning director Ivan I. Tverdovskiy (Zoology, Corrections Class), is based on a tragic true story, the terrorist attack in Moscow 17 years ago; Katerina Mikhaylova of Vega Film produces.

True events have also inspired the political thriller The File, the second feature by Jonas Karasek, brought to us by prominent producer Wanda Adamik Hrycova (The Line) of Wandal Production, Slovakia.

Also represented by two debuts is Romania with Clara, a portrait of the country’s recent exodus, by Sabin Dorohoi, produced by Daniel Burlac (4 Months, 3 Weeks and 2 Days) of Western Transylvania Studios; and Horia, a coming-of-age story by Ana Maria Comanescu, backed by Ada Solomon (Scrarred Hearts, Aferim!), microFILM, who has won over 200 awards in her 20-something-year career.

Our main slate is rounded up by two films treating the most complex of subjects –The Exchange by debut director Sergo Ustyan tells the story of a prisoner exchange on the Armenian-Azerbaijani border, Tigran Hambardzumyan of Persona Grata Group co-producing with Denmark, the UK, and Norway; and Sola, following a man on a humanitarian mission, by award-winning Chadian film director Issa Serge Coelo (Tartina City) with the production helmed by Wilf Varvill, Fire Engine, UK, looking for co-producers from the Nordics.

On to the Irish focus, which features July Fly, a story about redemption by debutant Stevie Russell, a successful commercial and music video director, brought to us by producer Samantha Corr of Venom Films; and The Sparrow by Michael Kinirons, whose features as a writer have boasted A-list casts and his shorts have won numerous awards, presented by Alicia Ní Ghráinne of Tiger Darling Productions.

Off to the other side of the world, for our Spotlight on Argentina, which has only just joined Eurimages. The Thaw, a detective story in a hostile environment, is the debut for director Facundo Escudero Salinas, who already boasts an impressive resume, produced by Nicolás Münzel Camaño of Pensilvania Films. The film is intended as a co-production with Bolivia and Uruguay, but is also looking for European co-producers.

In addition, one project will receive the Screen International Best Pitch Award, offering coverage of the lifecycle of the winning film, and two producers will receive the Cannes Marché du Film Producers’ Network Award for Promising Young Producer with free accreditations to next year’s edition.