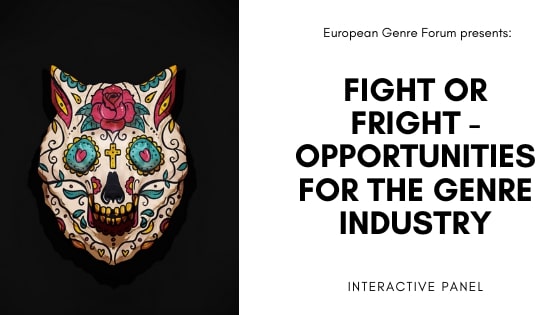 Join the Discussion: Fight or Fright – How Genre Industry Is Facing the Global Lockdown
News
Editor

European Genre Forum and Haapsalu Horror and Fantasy Festival have teamed up to organise a global fireside chat called “Fight or fright – how genre industry is facing the global lockdown” with genre industry players to discuss what the genre industry could and should do to cope with the ongoing crisis.

It comes as no surprise that the COVID19 epidemic has had a crushing impact on the global film circuit with a seemingly unstoppable wave of cancellations. The curfews have halted the whole lifecycle from production to festivals and markets, theatres, and digital releases alike and heated already strenuous relations between the studios, platforms, and theatres.

With an estimated more than half a million industry members unemployed across the world, it is clear that the recovery for the film industry will be long and will require fresh blood and brains across the board. But how is the Genre industry doing which always has been the bad kid with “out of the box” mentality when it comes to content, financing, production, and squeezing the latest promotional or tech gimmicks to the max to gets the thrills to the viewers?

With a few major festivals such as SXSW and Fantastia Festival down, but half of the genre’s A-listers such as Neuchatel and Bifan (South Korea) on its feet, and the viewers locked to their VOD offerings, could the genre circuit have a more robust change to emergence from the crisis as an unexpected winner?

European Genre Forum training programme and Haapsalu Fantastic Film Festival HOFF of the Tallinn Black Nights Film Festival invite you to join the season’s first digital deep dive into the state of the genre business to dissect how the industry is reacting to the COVID lockdown and what the community can do and is already doing to keep the blood rushing and the business kicking! Bringing together a festival director, a market runner financier, a duo of acclaimed independent producers and a sales agent, the digital Videodrome will see explore what will become of the festival and market circuit, has genre invaded the VOD and what to make or make not of the digital’s giants entry to the indie streaming landscape?

To ensure the maximum quality of the viewing experience and to enable participants to ask questions from the speakers and make comments, we recommend to pre-register and attend the event in the official environment.